When you can make a direct correlation between your workout movements and the same performance motions you make on the field, in the ring or on the court, you realize that you are developing more than just strength, you are developing core power.

Core Stix was originally created for world-class athletes and has since evolved into the most versatile fitness product available for building useable strength. Now everyone, from professional trainers to physical therapists are seeing the benefits of the Core Stix system to deliver usable strength to their clients. Using Core Stix means having core power.

The Core Stix Philosophy Is Simple, Yet Profound:

No one has ever shot a puck, taken a three-pointer or thrown a touchdown lying down, so why are almost all core exercises done with your back on the ground?

Usable strength comes from your ability to directly tie your training motions to real-life performance movements, which means you need to train standing up to get optimal results.

Applying the same principals of upright functional training to healing and recovery, physical therapists and seniors quickly started incorporating Core Stix into their routines in order to provide a safe and stable way to build usable strength.

The Core Stix Concept is Born

Mike Kadar, the Strength and Conditioning Coach of the Pittsburgh Penguins, was in search of a way to train himself and his athletes in a way that would have the highest possible impact on their performance.

To help develop a revolutionary solution, Mike enlisted the help of Kregg Koch, a design engineer for NASA’s Space Shuttle program and a patent attorney. The original concept came from the idea of developing “farm-strength”, highly usable strength that carried over through all daily activities and sports. Mike told Kregg about his time spent growing up on a farm in Canada digging holes for fence posts. It involved moving a heavy steel bar in a circular motion to dig a hole and he realized that not only was it a complete core workout, but it also helped him become a stronger hockey player in the years that followed.

Over the next few years, Kregg was able to engineer a heavy-duty, lightweight and portable system that uses fiberglass stix to train the body to build this usable strength. After research trials and testing, the Core Stix System was born and started to be carried by gyms, trainers and physical therapists – as well as home users looking for a more efficient way to burn calories and build usable strength. 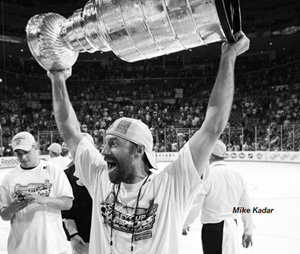 Founder and Strength and Conditioning Coach